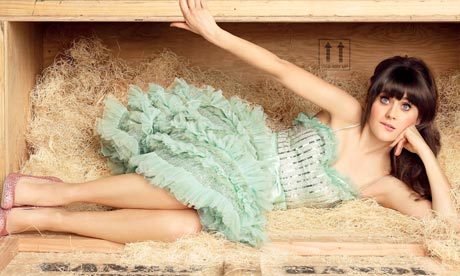 I have to tell you, I have a girl crush on Zooey Deschanel. The girl is not only gorgeous, but she has style,  she acts, she sings, aaaah, kind of hate her actually :p
Lately I've been watching her new TV series, New Girl, and I noticed a little anger growing inside me. No, Zooey, no need to panic. It's just that kind of rolling eyes kind of anger. (a.k.a. envy, he he)

Well, I noticed that the formula "I'm an average kind of girl, who is not confident enough, never been kissed, can't do anything perfectly without breaking some glass or bumping into things, silly-stupid-cute puppy eyes kind of girl" only works when you are a fat-ass I eat half kilo of ice cream watching Moulin Rouge for the 100th time crying and singing along.

It just doesn't work when you are hot, cute and gorgeous. Because what happens then? All the boys like you more. And WE, average girls, those who cry because was trying to take a black spot from your face and now have a giant enormous red disgusting thing on THE same day you have a job interview, we start rolling our eyes when see pretty girls pretending she is US on television.

That was what happened. The other day I told at my workmates that I was watching the series and aaaaaaaaaall the guys said oh yes, she is cute, oh yes, she is hot. Helloooooooooooooou???
I knoooooooow she is, so could you now please zip it?

Hahahahaha, really, what I mean is that it is already very frustrating to shout to your husband when he asks you where the council tax pad is and you start a whole monologue of HOW you are not responsible for everything in the house or if HE would like things in certain places HE should tidy up things instead of leaving this role to YOU to do and that maybe the 2012 pad hasn't even arrived yet and HE is blaming you to throw away stuff that is not litter, and bla bla bla, so YOU leave the house saying that YOU have a life and a job and can't spend the whole morning looking for his things, and what happens next?? 15 minutes later he text you saying that the pad you in YOUR personal bag.

Frustrating right? Now, can you imagine being like this and NOT having gorgeous perfectly rounded blue eyes and a fringe that never gets greasy and fit on a size 8 dress?

:p hahahaha Zooey shhh don't tell anyone, but I still watch New Girl every week.
Posted by Helena is... at 11:14 AM