Away from Home: Interview with Ciana Lago

Today's interview is with a very good friend I've met when I lived in Buenos Aires. Some people know how to live the life, and even when life gets tricky and difficult, they never, never stop smiling. This is Ciana, a sweet pretty girl (but who can be really loud when she wants! he he)

Here she is!!! Gracias chica!


Name?
Ciana Lago
Age?
29 years old
Nationality?
Brazilian.
City and Country where do you live now?
Buenos Aires - Argentina
Do you have kids?
No. But I would like to already keep the names Chloé and Milo for my future kids. They are mine, I'll have this blog as proof.
Profession?
Journalist, copywriter and radio DJ
Do you work? Study?
I work as a copywriter producer for Disney Channel Latin America and I co-host a radio show called Canta Brasil at Radio Palermo.
Do you do any extra activity (gym, yoga, crafts)?
I try to go 3 times a week to my Functional Gym classes
Why have you moved away from Brazil?
I came to Argentina because of work when I was living in Rio and worked for Globostat. So I thought: "Why not? If I don't like there I can always come back after the first year" Well, that was not what happened.
Do you feel part of the local culture?
I do. And you know it's not a difficult thing to feel at home in Buenos Aires. But still bothers me when I arrive to a party at midnight and still there's no one around. Everything starts so late in here.
Have you ever wanted to go running back home? Why?
In the beginning, yes. During my "adaptation period" -  something that I've never believed that really existed, but it does.
What does make you want to stay?
The mix of work and people who became really important in my life. One thing wouldn't survive without the other.
If you could choose a favourite place in the city you're now, where should it be?
The 3 Febrero Park, just in front of my flat. But I also love to get lost walking through Palermo streets (Call me cheta!). Cheta means posh in "argentinean")
Is your life abroad very different from what it was back in Brazil?
Not much. It's like leaving in the same way but in a different scenario. Maybe my life here it's more quiet and I might feel more in control of my life.
What would make you return home?
At this moment only an extreme situation at work or with my family in Rio. But I'm not making any effort for that to happen. But these things change all the time.
Where do you feel more beautiful? In Brazil or abroad?
Today I see myself more beautiful than when I left Rio but it's because I feel more mature, now that I'm getting close to the 30's. But you can't deny that in Rio I blend more easily to the crowd. In Buenos Aires, different from the Argentinean girls, I'm more full of curves. It can be good or bad, depend on the day. 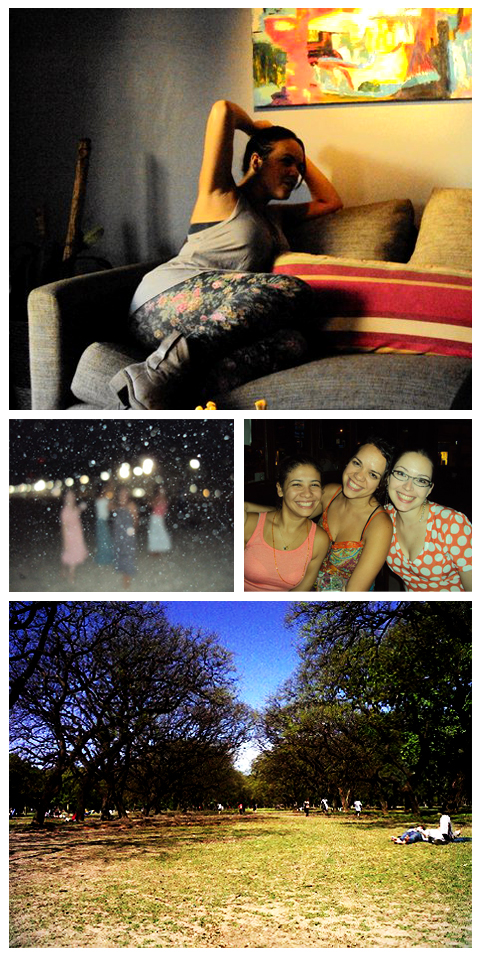 Email ThisBlogThis!Share to TwitterShare to FacebookShare to Pinterest
Labels: Away from Home